Just wanted to shoot out an email before the weekend.
My new book, Lies In The Dust: A Tale Of Remorse From The Salem Witch Trials was just given a great write-up in The Boston Globe today. Here's the link: Lies In The Dust review

Being in the Globe feels kinda cool since I went to college there. Feels like I must be doing something right with my life.

This is my first graphic novel...but also my first book under the pen name of Jakob Crane. In 2015 it is looking like it will also hit the stage as a play! So now I have to write the play...

So the reason for this email...well of course is to promote my book but also to say that if any of you tweet please follow and mention @jakobcrane or #liesinthedust and I will forever be in your debt.

Because after all--he is exactly as cool as me:)

http://www.bostonglobe.com/arts/books/2014/08/29/reviews-lies-dust-jakob-crane-conversion-katherine-howe-nelson-unfinished-life-addison-stone-adele-griffin-and-give-you-sun-jandy/43NgqrSN5EhQwgThcOGppL/story.html?hootPostID=06ffb341cef18fd27ce3305836023e2b
Posted by ArtNews at 6:36 AM No comments:

Posted by ArtNews at 8:29 PM No comments:

Hi All:
The Danbury Drum Corps is looking for a musical director for the fall (September to May). We meet at the CWV on Wednesday evenings from 730-930PM. Ages 13-up. Our instrumentation is fifes, bells, trumpets, baritone horns as well as drums. We currently have a drum line instructor.
This is a paid position and is negotiable depending on experience.

You can check us out on www.danburydrumcorps.org. Or send an email to drumleader1@hotmail.com
Posted by ArtNews at 9:33 AM No comments:

Posted by ArtNews at 7:15 AM No comments:

The address is 333 W Meyer Boulevard,KC, MO. It is the large blue 50's style condo at 64th and Wornall Blvd. near Brookside.

Parking is on the south side of building in the adjacent lot. There is a business door on Wornall side.
dcdcdc67@hotmail.com
Posted by ArtNews at 10:13 AM No comments:

I am reaching out to ask you to be a part of the Kickstarter campaign for "All Roads", my new Sacred Chant CD. Please check out the link below and consider supporting the campaign.

I am really excited to share this music with the world and I know you are going to love it! There are a lot of great rewards for every level of donation, including CD's, downloads, original watercolors, and even a trip to Mexico as part my "Awakening Your Creative Fire; Yoga & Art Retreat" with Ramdesh Kaur, so please contribute whatever feels right.

Also please help spread the word by sharing the link on your page.

Infinite Gratitude and All Love, Tony/Harnam

Posted by ArtNews at 1:08 PM No comments:

Westport Arts Center is currently looking to hire a new Education Fellow for the upcoming Fall season. Please forward this on to anyone you think might be interested in this opportunity!

I have attached the job description with this email and a link to the posting on our website may be accessed at http://westportartscenter.org/support/get-involved/employment/
Inquiries may be directed to Education Manager, Lindsay Heffernan, at lindsay@westportartscenter.org.

All programs will be at 11 a.m. in Room 144 of the Visual and Performing Arts Center on the WCSU Westside campus, 43 Lake Ave. Extension in Danbury unless specified.


Ray DiCapua: artist, educator
Thursday, September 25, 2014
Ray DiCapua is Associate Professor of Drawing/Sculpture at the University of Connecticut, Storrs, where he serves as Associate Head of Admissions and co-coordinator of the Sculpture Studies area. He is the recipient of the 2014 University of Connecticut Teaching Fellow Award. He received his MFA from UMass, Amherst.

Fritz Drury: artist, educator
Monday, October 6, 2014
Fritz Drury’s work, based in figurative narration, has been widely exhibited with reviews in Art in America.  He has shown in NYC at The Painting Center, the National Academy of Design,55 Mercer Gallery, Charles Cowles Gallery, and others.  He is a recipient of awards and grants that include an Ingram Merrill Foundation Fellowship.

Monday, November 3, 2014
Amber Scoon is a mixed media artist and writer.  She received her undergraduate degree from NYU and her MFA in painting from American University’s program in Italy.  She received her PhD in Media and Communications from the European Graduate School in Switzerland, where she is now the John Berger Fellow.  Through other residencies, she also studied with Marjorie Portnow and Margaret Grimes.
Scoon is currently Assistant Professor of art at Texas A & M University, Corpus Christi.

John Goodrich: artist, writer, art critic
Monday, November 17, 2014
John Goodrich is a painter and a writer on art in New York City. His drawings and paintings have appeared in many exhibitions, including solo shows at Bowery Gallery in NYC and the Contemporary Realist Gallery in San Francisco, as well as group shows at Elizabeth Harris Gallery, Kouros Gallery, Lori Bookstein Fine Art, among others. His work has been reviewed in The New York Times, The New York Sun, The New York Observer, The New Haven Register, and other publications.He currently teaches at Haverford College and the National Academy School of Fine Arts.


Thursday, November 20, 2014 at  8:00 PM Exhibiting artist James Grashow, creator of "Corrugated Worlds," will discuss his work at 8 p.m. in Room 108 of the Visual and Performing Arts Center on the WCSU Westside campus, 43 Lake Ave. Extension in Danbury. The event will be free and open to the public. For more information, call (203) 837-8403. For a complete list of similar SVPA events, visit www.wcsu.edu/svpa/events.asp.

Dan writes, "If you are in the art pavilion @ the Bridgewater Fair say hello to my chicken wire snowman. A unique creation, alas his candle heart cannot be lit due to the presence of the awesome Bridgewater Volunteer Fire Department. Go enjoy all those blue ribbons @ the fair this weekend."

Posted by ArtNews at 9:26 AM No comments:

Art Walk Ridgefield - August 22-September 14
is an exciting opportunity for many of merchants in downtown Ridgefield, CT, to exhibit the work of members of the Ridgefield Guild of Artists.
My sculptural work will be featured at Watershed Gallery.  I will have four large pieces of sculpture and five of the new bas reliefs at the Watershed Gallery.
Concurrently, I will have another large sculpture at the Ridgefield Guild of Artists which is "just down the road a piece" by car at 34 Halpin Lane. 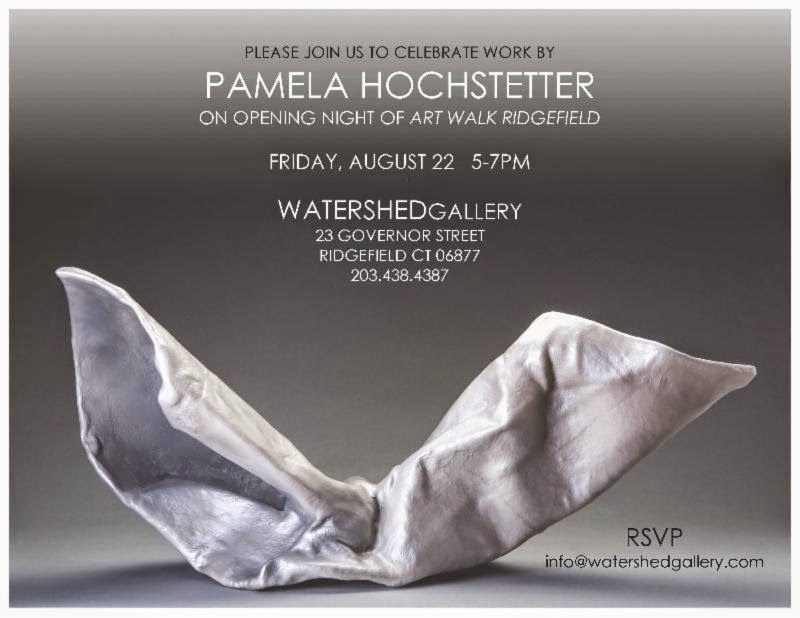 *Saturday, August 23, noon-4pm - Art Walk Artist Day in shops and galleries. Participating artists will either be demonstrating or speaking about their work.
I will be giving a "walk and talk" at Watershed Gallery at 5pm.  I will be speaking about my inspiration, process and history as a working artist.  Q and A will follow.

*Saturday, September 13th at 4pm - I will be conducting a second "walk and talk" for those who might have missed the first one or would enjoy an encore presentation.

Posted by ArtNews at 6:25 AM No comments:

Landmark will hold auditions for their production of the Christmas classic, "A Christmas Carol", on Sunday August 24th from 3pm – 5pm and Tuesday August 26th from 7pm -9pm at the Arts Center Theatre of the Thomaston Opera House, 158 Main Street, Thomaston CT.

If you are interested in a part and are unable to make the audition times posted or have questions regarding audition requirements, please contact: info@landmarkcommunitytheatre.org The production will run November 28, 29, December 5, 6, 12, 13 @ 8pm and November 30, December 7, 14 @ 2pm.

Ebenezer Scrooge is a penny-pinching miser in the first degree. He particularly detests Christmas which he views as 'a time for finding yourself a year older, and not an hour richer'. Scrooge is visited, on Christmas Eve, by the ghost of his former partner Jacob Marley who died seven Christmas Eves ago. Marley, a miser from the same mold as Scrooge, is suffering the consequences in the afterlife and hopes to help Scrooge avoid his fate. He tells Scrooge that he will be haunted by three spirits. These three spirits take the miserly Ebenezer Scrooge on a journey through his past, present and future where he learns the true meaning of Christmas and life. This traditional re-telling of Charles Dickens’ timeless classic will enchant you and your family!

Casting requirements call for several roles of all ages for children and adults. Auditioners will be expected to read from the script of the role for which they are auditioning. Auditioners are also encouraged to contact Landmark in advance to confirm their interest; however, walk-ins are welcome. Email: info@landmarkcommunitytheatre.org OR LIKE us and send a message to us on Facebook: www.facebook.com/LandmarkCommunityTheatre OR call the main office: (860) 293-8558.

Character Descriptions:
Ebenezer Scrooge - The miserly owner of a London counting-house, a nineteenth century term for an accountant's office.
Bob Cratchit - Scrooge's clerk, a kind, mild, and very poor man with a large family.
Tiny Tim - Bob Cratchit's young son, crippled from birth.
Jacob Marley - In the living world, Ebenezer Scrooge's equally greedy partner. Marley died seven years before the narrative opens.
The Ghost of Christmas Past - The first spirit to visit Scrooge, a curiously childlike apparition with a glowing head..
The Ghost of Christmas Present - The second spirit to visit Scrooge, a majestic giant clad in a green robe.
The Ghost of Christmas Yet to Come - The third and final spirit to visit Scrooge, a silent phantom clad in a hooded black robe.
Fred - Scrooge's nephew, a genial man who loves Christmas.
Fezziwig - The jovial merchant with whom the young Scrooge apprenticed. Fezziwig was renowned for his wonderful Christmas parties.
Belle - A beautiful woman who Scrooge loved deeply when he was a young man.
Peter Cratchit - Bob's oldest son, who inherits his father's stiff-collared shirt for Christmas.
Martha Cratchit - Bob's oldest daughter, who works in a milliner's shop.
Fan - Scrooge's sister; Fred's mother.
The Portly Gentlemen - Two gentlemen who visit Scrooge at the beginning of the tale seeking charitable contributions.
Mrs. Cratchit - Bob's wife, a kind and loving woman.
Children Carolers & Extras
Posted by ArtNews at 10:43 AM No comments:

Subject: Looking for an Art instructor

We had a request from one of our contacts for someone to teach an intro to art class to communications and business students in the fall. Do you know anyone with a masters degree in art that may be interested? We think the class will be Monday/Wednesday at 4  in Southington.

If you or if know someone who might be interested please reply to this email and we will forward it to the Contact person.  Thank you.

Posted by ArtNews at 6:18 AM No comments: 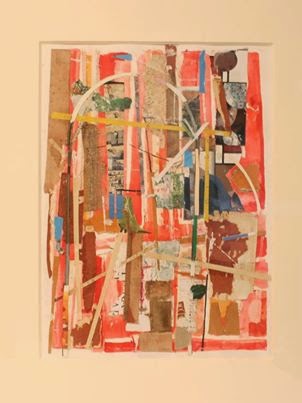 Posted by ArtNews at 7:57 AM No comments:

Posted by ArtNews at 9:08 AM No comments:

I hope to see all of you at the receiving Sept. 23rd! 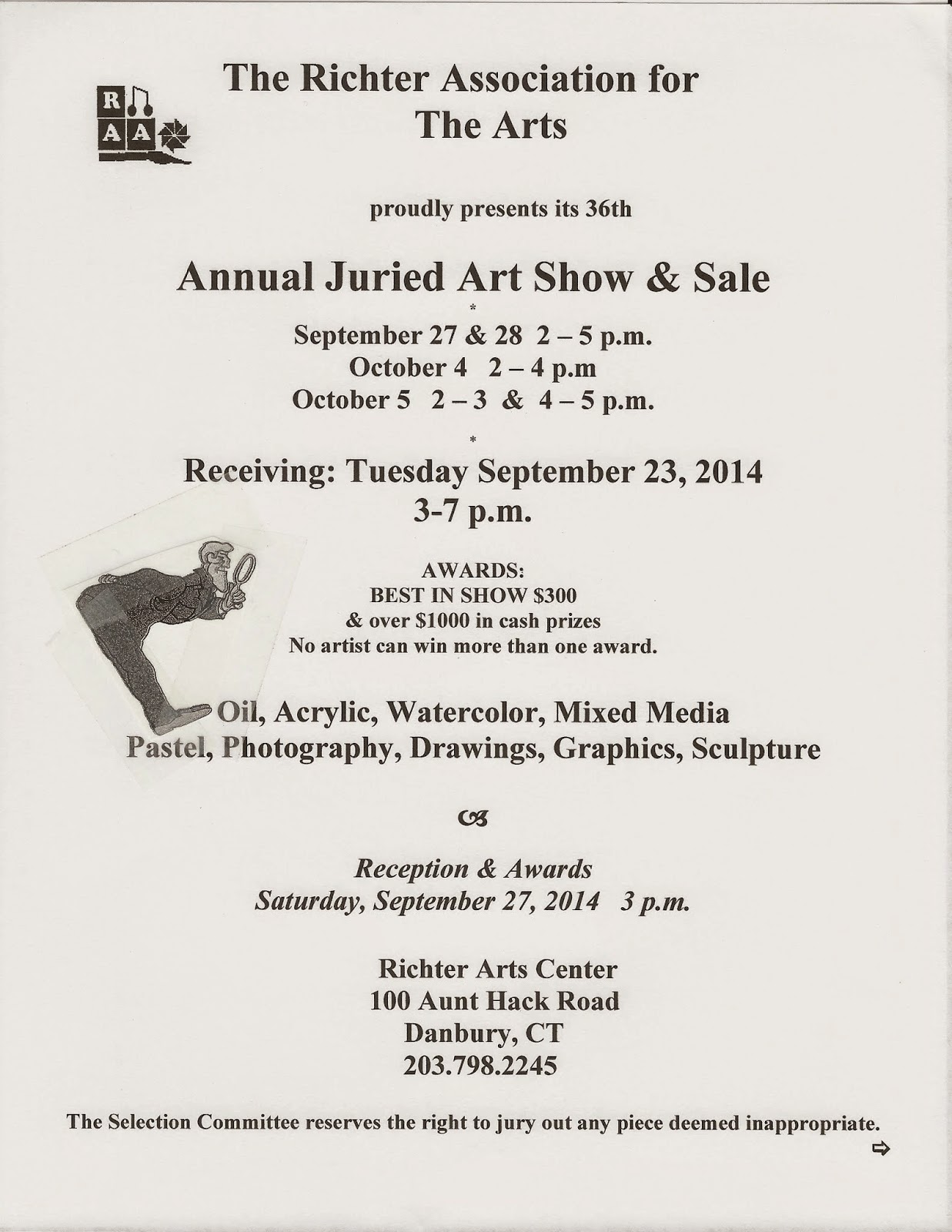 Awards reception September 27 at 3 pm.  Stop by to see a great show and enjoy the wonderful refreshments always put out by out visual arts committee.
Posted by ArtNews at 7:51 AM No comments:

The Cultural Alliance of Western Connecticut seeks entries for its 2015 Accessible Art program, an annual year-long, multi-site series approaching its 7th year of presenting visual art exhibitions. The Cultural Alliance offers spaces for exhibitions “inside” shops, businesses, and organizations as well as, newly added, installations "in the windows" of storefronts. Deadline for entries is Friday, November 21st 2014, for scheduled exhibitions between January 19th through December 31st, 2015.


The Accessible Art program is a collaboration among the Cultural Alliance of Western Connecticut, both public and private venues, and the artists, The Cultural Alliance's intent is to provide opportunity for artists to show work in alternative spaces and to make art more accessible to the general public, while also a way for business leaders to leverage creative talent to promote economic development and bring life to downtown communities. Accessible Art has presented almost 100 local and regional visual artists since its inception.

To celebrate the change of season, we will be hosting "Cool It Down" an autumn-themed group art show.

Submission Guidelines:
Deadline is Monday, September 8
Entry fee of $20 per artist, due at time of drop off
Limit 3 pieces per artist
Max size 30"x30"
All styles and mediums acceptable, both 2- and 3-Dimensional
All work must be ready to hang

Facebook: www.facebook.com/artandframe
Posted by ArtNews at 7:13 AM No comments: