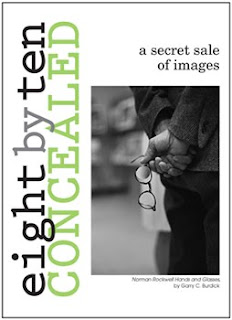 Garry writes, "Parts of my work are in the poster for the Film Fest out of New Milford. Note the photo of hands and eye glasses is one of mine from the Norman Rockwell series (his hands ). Click on it to see credit. Delve into the sight to read more about it."

eight by ten CONCEALED
a secret sale of images

over 75 unique photographs by acclaimed and emerging artists will be for sale, and the artists’ identities will be revealed only after purchase

additional works by artists including Garry C. Burdick and Bill Eppridge
will be on silent auction at the event